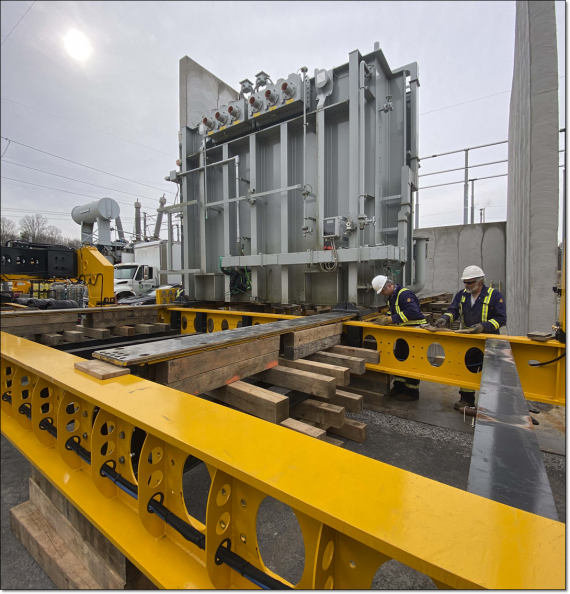 The quote process started back in January with the first unit having to be removed from an existing facility in Pennsylvania. The jack and slide method was utilised to carefully move the piece off its existing pad and over rails onto a transport trailer.

Once secured to the trailer, the super load, escorted by police, was trucked through a small city with a wire lifting team carefully moving overhead lines out of the way to let the unit pass under. The transformer was then switched over to a specialised rail car, again using the jack and slide method, and secured using welds before being transported from Pennsylvania to Texas.

The second transformer, from Michigan, had a few other challenges that required extra planning. Initially truck transport was proposed but issues with bridge weight limits along the route made the mode unsuitable.

Due to state frost laws, the team was unsure if rail transit would be feasible, but inevitably decided that using a special train service, once frost laws were lifted, would ensure on-time delivery. Obstacles continued to arise as the route to the rail side changed three times due to culverts and road concerns.

The next issue encountered was at the origin site as the location did not allow for jack and slide delivery. The team proposed lifting by crane, however, the excessively soft ground required crane mats to be brought in to provide a stable surface for the crane.

With the MPT now safely transferred onto a Goldhofer trailer and securely fastened, the move began, and the unit was transported six miles to rail side. The crane was used again to swap the transformer from the trailer to the rail car.

Once secured, the special train service proceeded to a stop near Fort Worth, Texas, where the MPT was trucked back-to-back for delivery sixty miles to site, arriving intact and on-time.

The project would not have been possible without C.H. Robinson’s strong vendor partnerships to execute the job and the supervision of their experienced project managers who were on-site for loading and delivery of both units.

The client was extremely pleased with the condensed time-frame and C.H. Robinson’s execution:

"Those were some amazing moves! The team delivered two massive MPTs thousands of miles away, safely and right on time! I really appreciate all the effort on coordinating pickups and deliveries with multiple parties and keeping us in the loop the entire process. Looking forward to working with you and your team in the future. Thank you."